'Sky'
5 year old paint x welsh
Sky came to me as a last resort after being branded 'psychotic' by another trainer who believed she should be euthanized.Sky was extremely difficult and sometimes even dangerous to handle and it was impossible to lunge her. I started working consistently with her and she soon became a lot safer to handle and would lunge nicely on a circle without trying to run me over as was her original habit.
Despite excelling in ground work she was still very 'spooky' and would have a complete melt down every so often. After consultation with her owner, we started her on a magnesium supplement which seemed to help her general nervousness tremendously. She accepted the saddle very well as we progressed through training and long reined well with little hassle. However, she displayed a lot of resistance when it came to ridden training so her owner had her checked by a physio. She was very tight through her back and hind quarters so she had several treatments before we continued. this seemed to help her a lot
A few months later she was sent to a different yard to for experience and to help her learn to cope away from her field buddies!.Another trainer worked with her at this yard and I heard excellent reports in her progress. She is now back with her owner and progressing steadily.

'Beau'
Beau was considered a 'dangerous' horse and common opinion was that she should be euthanized as she was 'untrainable' and 'evil'. She had an aggressive field manner and would rear up at people if the came near her. She had also developed a habit of rearing and flipping over on people when ridden. However, undeterred by the opinions of other people and trainers, her owner still believed there was good in this pony and came to me for help. As we worked with Beau it became clear that she was just misunderstood and we later discovered that she had poor vison in her right eye. Beau has come on tremendously and can now be ridden by her owner, as well as approached and handle by anyone- even children!

'Destiny'
8 year old appaloosa x welsh
When I first met Destiny he was a nervous wreck, absolutely terrified of people, movement and sounds. He had unfortunately had a traumatic experience with saddling where he pulled back once and took off, the saddle slipped round scaring him even more. He took out several fences and was petrified when he was finally caught. It was after this experience that he developed his extreme phobia of people and saddles! it was thought he may never be ridden again. I am happy to say that after several months of dedicated work, Destiny is now very confident around people and has been re-schooled by myself showing excellent ridden work. His owner is now able to ride him once again.

'Sincero'
Feral Peruvian Paso stallion
Sincero had been left to roam feral and his only experience with people was being chased into a chute for an injection and then pushed through into a trailer. He was extremely wary of people and I was given the task of halter breaking him with in two days. Once I had gained his trust the halter breaking was an easy process and he is now handled regularly and is starting training for his ridden career 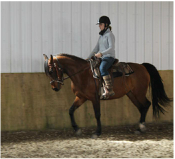 'Adore'
8 year old Andalusian x Arab
I took 'Adore' on for re-training. His owner was having trouble with his herd bound behaviour and 'nappy' tendencies. He was also very cold backed and would try to buck as soon as he was mounted, He made excellent progress in training and became a much safer ride. He is now settled with a new owner who enjoys taking him on trail rides and low level dressage competitions 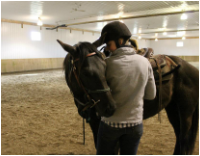 'Viente'
4 year old Quarter Horse
Viente was originally an auction rescue who's past experiences had left him terrified of humans, making
him extremely difficult to catch, let alone work with.
However, through patience, understanding and trust I was able to 'back' him and as his confidence
grew he became an excellent ride.
After training with me, he went on to be ranch horse and trail horse. Last summer he was ridden on a
camping trip in the Rocky mountains.

Lily was a high spirited pony with 'atttitude'. She was highly sensitive and lost confidence
quickly. It was thought that she might be untrainable. However, she came to me for 'backing'
and within a few weeks I had established a trusting relationship with her and was able to ride
her using the gentlest of cues.

'Gia'
7 year old Cob
Gia was a rescue case, previously subjected to abuse and had had a headcollar left on so long that it had rubbed into her face and scabbed over. She was extremely hypersensitive to sound and touch and would not allow a headcollar to be put on her. she would not allow her feet to be touched and hadn't been seen by a farrier in a long time judging by her feet.
She was taken on by her new owner who enlisted my help re-habilitate and train her.
She has now become very trusting of people and can be caught by myself as well as her owner, as well as be groomed and treated by a farrier.
She in lunging nicely and has recently had a saddle on for the first time.